iOS built in keyboard comes with the French, Spanish accents and special characters, in this article we’ll review it how to use.

Typing letters with accents on your iPhone and iPad can be very easy. In this guide, we will explain the different input methods for special characters and letters with accents: via key combinations or smart aids on the screen. Doing so is easier than what most people think. We will also explain how to type accented letters such as é, ç, and ñ on the iPhone and iPad. Also know how to Type accents on Mac keyboard, Typing accents on Windows 10.

For example, you want to type the word “one” with an accent on the E:

Other Letters With Accents Such As ç and ñ

The use of letters with accents as explained above works with the letters A, E, I, O, U and N, even if you write capital letters, so it’s good to use it if you need something done in a Spanish keyboard, for example. If you want to write a variant of the letters C, L, S, Y or Z then you need the keyboard in a different language. In the Dutch keyboard for iOS, these letters are not available in several variants.

For example, if you want to write the ç in cedille, you need the French keyboard:

Step 1- Open the Settings app on the iPhone or iPad.

Step 3- Choose the language in which the desired accented letter is used, French in this case. For letters with the umlaut, you are better off using the German keyboard. The Spanish ñ is, however, available in the Dutch keyboard.

Step 4- Go back to the app where you wanted to enter the text. On the left side of the keyboard, you will find a button with a globe. You can use this to switch to the French or German keyboard.

Step 5- Now choose the French keyboard and hold down the letter c to type the ç. You will now see several variants of the letter c in the picture. Slide your finger to the c you need and release it.

With the globe button, you can go back to the Dutch keyboard again.

There are even more possibilities to enter special characters and punctuation in this way. Below we will discuss the input of currency signs, alternative quotation marks, inverted question and exclamation marks, the paragraph mark, and bullet points for enumerations.

Quickly Choose Currency Signs In iOS
In the same way, you can quickly choose other currencies on the Mac, for example, typing euro symbol, Japanese yen symbol or the British pound.

Quickly choose quotation marks in iOS
You can also choose different quotes if you press and hold the single and double quotes button.

Reverse Question And Exclamation Mark Types in iOS
You do not need to set a Spanish keyboard to tap the opposite question mark – you can also easily reverse the exclamation mark by holding down the key.

Type the Paragraph Character in iOS
Yet another hard-to-find punctuation mark on the iPhone keyboard: the paragraph mark. To do this, press and hold the ampersand sign.

Degrees, Promilles and Spheres in iOS
For the gradient sign (º), press and hold the zero button. For the ‰ sign, hold down the percentage key and for several bullet points (including dots), press and hold the minus key. There are many more possibilities. For example, you can easily type the backslash by pressing and holding the slash. And everyone knows this: you can quickly change between .com, .nl and .be. This only works in the Safari browser. 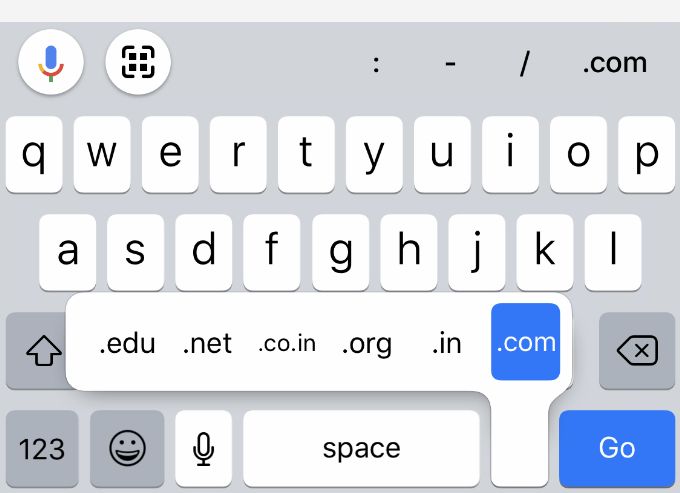 To read more articles like How to add Accents Using the iPhone Keyboard we recommend you to enter our Tips and Tricks category.